Over the years I have analyzed numerous companies hydroponic nutrients and additives. What I have learned from this is that there are many approaches taken in formulation and, often, there can be significant variations between what these formulas ultimately provide to the plant in the way of mineral nutrition (i.e. ppm of each element delivered to the plant at a desired EC – e.g. 1.8 in grow). 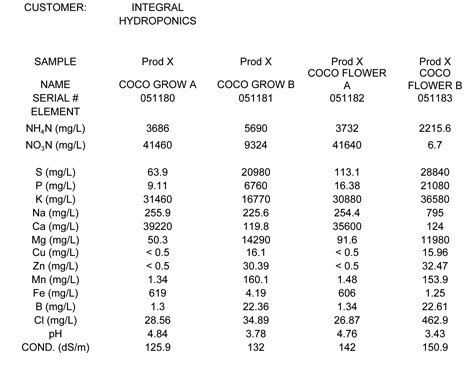 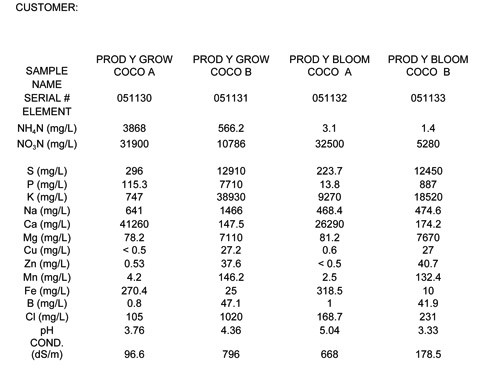 OK, let’s now have a look at some of the numbers (mg/L) of each element that are found in the two Australian companies formulations.

Note Product X’s numbers against those of Product Y’s formulas. They are extremely different no matter which way we pitch it (e.g. we could analyze concentrations etc but let’s not go there for now).

I’m now going to throw in another analysis from a coco bloom formulation made by the same company that makes our ‘product Y’ formulas. The new analysis (numbers) are from a ‘Coco Bloom’ formula that company Y manufactures for a store that has its own home brand label. What I’ll do is put company Y’s bloom formula numbers/analysis (that we’ve already looked at) next to that of our new example so we can compare the differences. 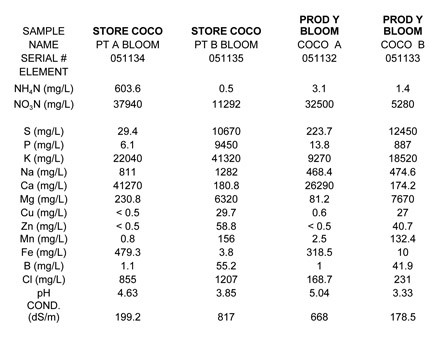 Note the differences in the P and K levels (among other things) – these formulas are completely different and yet they are made by the same company (at the same location) as a ‘Coco Bloom’ formula for Australian growers.

Let’s now have a look at another company’s coco formulation. This European company takes an entirely different approach and makes a one size fits all two-part formula for both grow and bloom. 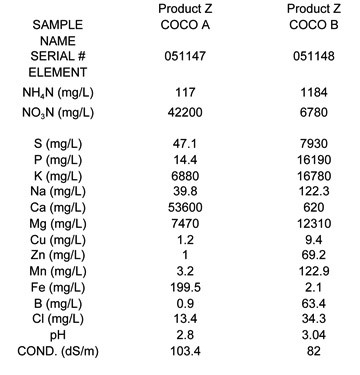 Again, compare all the numbers of all the formulations and you will note significant differences.

As you can see the numbers are all over the place and what is ultimately delivered to the plant in the form of nutrition will reflect this.

Let’s now put the NPK ratios of all the formulas next to each other and have a look at them.

Even when looking at these numbers you can see significant differences between the formulations and what will ultimately be delivered to the plants as mineral nutrition.

OK, now let’s compare our product Y formulas to the European (Product Z) formulas when they are diluted at 1:250 (4ml/L).

We conducted comparative analysis on both formulas in the Netherlands in 2005.

Tests in the Netherlands 2004 with products purchased in Australia

Don’t get hung up on the chemistry – the numbers for now are the important thing.

Look at the “Omrekening v/v %” to see the variants of elemental percentages contained in these products and note the differences. They are significantly different products.

OK, so let’s analyze the two companies’ part A and B formulations (at 1:250 dilution) and put the numbers side-by-side. 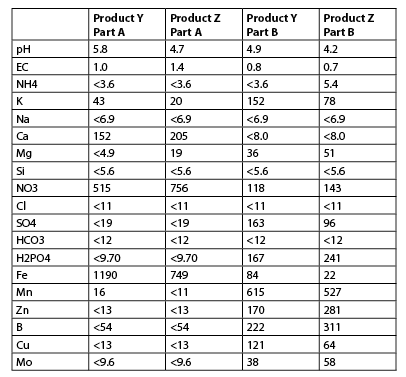 Author’s note: Just in case you need to touch up on the math – “<” symbolizes lower than.

These analyses are interesting in that they reflect what the plant will be delivered as mineral nutrition when our formulas are diluted in the reservoir/nutrient tank and fed to the plant/s.

As you can probably tell some of the elemental percentages are extremely different. Our European formulas have more calcium (Ca), more magnesium (Mg), more NO3 N , more NH4 N, more phosphates (P), less potassium (K) and lower levels of iron (Fe) and sulfates (SO4). Other than this our European formulas possess lower levels of the micro elements manganese (Mn) and copper (Cu) while possessing higher levels of zinc (Zn), boron (B) and molybdenum (Mo). This is nothing unusual – we analyzed over 30 products in the Dutch based lab tests (both coco and standard products) and in all instances, the numbers, comparatively, were all over the place.

There’s something I said in Integral Hydroponics about this. “If you were to put a 100 hydroponic gardeners in the same room there would be a raging debate about the best nutrient to use (among other things).”

Both of our formulas/products are sold worldwide. One product derives originally from a European manufacturer (although our formulas taken from an Australian sample presumably will be somewhat different to those of the European parent company’s formulations) while the other originates from Australia and is distributed through affiliate companies in the UK and North America. Therefore, they are both multinational brand names with large followings and both products have reasonably good reputations.

Personally, I chose to work with the European product (actually I reverse engineered it and changed it somewhat) and preferred this over the Australian formulation. Coco has naturally high levels of potassium and (in some instances) sulfates and a nutrient developed for coco substrate should be formulated with this in mind.  Other than this, potassium competes with calcium and magnesium and, therefore, a coco nutrient requires higher levels of calcium and magnesium to compensate for this (note the European formula has 205ppm of Ca versus product X with 152ppm Ca). The European formulation – at least on paper – looks better all round when considering the science of coco substrate. For this reason, after using their formula I based my own formulation around their numbers, tweaking and changing a few things as I went. For instance, I added amino acids, fulvic acid, B group vitamins, nickel (nitrogen trigger agent), and cobalt, which definitely gave my formula an edge. Other than this I also dropped Ca and Mg a tad and raised Fe (after running tissue analysis).

Having said this, I’ve also worked with the Australian company’s products and found that they performed reasonably well.

The fact is, there is no off the shelf “hydro” nutrient that is perfect – that’s something you need to know now.

For instance, at least from an agricultural science perspective, nutrients should be formulated factoring the water supply into the equation. Mains water contains varying levels of minerals/elements and these can ultimately play a major role on what a nutrient will look like when it is delivered to the plant. Mains water supplies vary city-to-city (often suburb-to-suburb), town-to-town, state-to-state and country-to-country and this is a significant factor in perfecting any nutritional regime for plants.

By way of example, a nutrient formulated for demineralized (RO or rain) water should look very different than a nutrient that is formulated for mains water and yet all of the examples we have covered are being used by growers in various locations who are using (in many instances) extremely different water supplies. We’ll cover water shortly but for now, let’s look at a few more formulas. 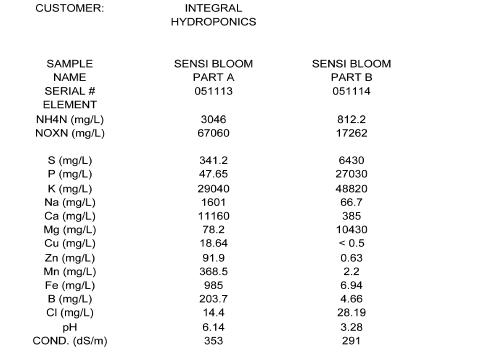 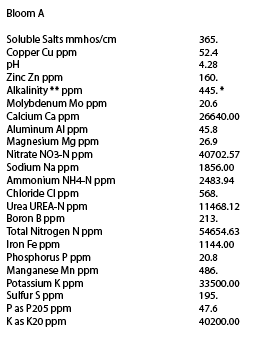 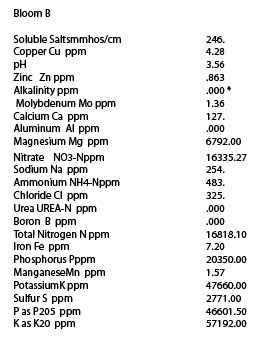 In the 2010 tests conducted in the US on a US purchased product, ‘Company X’ has diluted the NPK of their Standard Bloom formula by approximately 20% since our original tests which were conducted in Australia in 2005 (see following % comparison). However, more interestingly, Company X have increased calcium by 138% (via increasing g/L calcium nitrate) in ‘Standard Bloom’ to levels that you would expect to find in a balanced formulation. Other than this, they have reduced magnesium by 35%, reduced S and increased Fe. What it comes down to (simply) is we are looking at are very different formulations (and yet both are claimed to be crop specific).

Lab Analysis Conducted in USA on Product Purchased in California (2010) 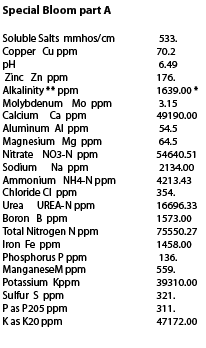 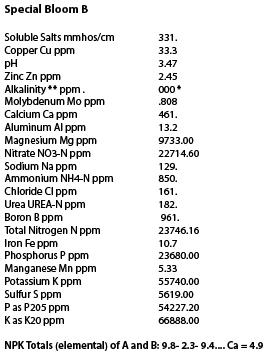 Comparison of US Standard Bloom and Special Bloom Products (2010)

Comparison of the Three Analyses

Without going into full-blown chemical analysis, you can see that these are extremely different formulas and yet they are all formulated by the same company for what they claim is the same type of plant. Hmmmm…. (?)