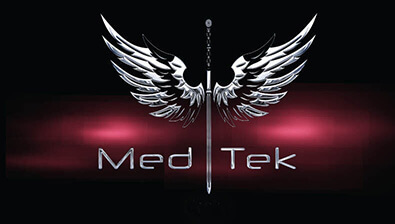 There are both beneficial bacteria and fungi genera that are used in root disease prevention. Some examples of beneficial fungi genera are Trichoderma and Arbuscular Mycorrhizal Fungi (AMF) and some examples of beneficial bacteria genera are Bacillus and Pseudomonas. Each genus (genera) of bacteria and fungi also has various species, so for example there is Bacillus (genus) subtilis (species) and Bacillus (genus) cereus (species).  Or there is Trichoderma (genus) harzianum (species) and Trichoderma (genus) viride (species).

Bioinoculant (Bennie) additives can contain a single species of bacteria or fungi or multiple species of either bacteria or fungi or both bacteria and fungi. These additives are then typically added to the nutrient solution whereby they applied to the substrate through fertigation. Once applied to the substrate, providing the environment is conducive to their survival and proliferation, the beneficial bacteria and/or fungi colonise the rhizosphere and prevent root disease.

To put things simply, beneficial bacteria and fungi prevent root disease through several key mechanisms of control; 1) they directly compete against pathogens, filling their ecological niches and competing for nutrients, thereby not allowing pathogens opportunity to grow/colonise; 2) they disrupt and/or kill pathogens through the release of secondary metabolites, antibiotics and enzymes and; 3) they can trigger systemic acquired resistance (SAR) or induced systemic resistance (ISR) which primes the plant’s defense system against pathogens.

Key things to understand about using Bennies to prevent root disease are:

Beneficial microbe science is an extremely complex subject that is, too often, oversimplified by those with interests in selling beneficial bacteria and fungi products through the hydroponics industry. Just one of the practices that is common is manufacturers/suppliers present positive findings from soil-based research and apply this to an entirely different growing methodology – hydroponics – where, among other things, microflora, pH, EC, media matrix, microbial food levels, nutrient levels, and the bioavailability of nutrients are extremely different from soils.

For example, there are several Arbuscular Mycorrhizal Fungi (AMF or AM fungi) products/additives available through hydroponic stores. However, there is some debate about AMF viability in hydroponic settings. I.e. the benefits of AMF are greatest in systems where inputs of inorganic phosphorous are low. Heavy usage of phosphorus fertilizer can inhibit mycorrhizal colonization and growth. Various studies have shown that because of the high input of inorganic phosphorus in hydroponic systems, AMF colonization is reduced. Additionally, AMF colonization appears to be reduced in high N environments such as those found in hydroponics.

3) Bioavailable N plays a pivotal role in AM fungi colonization

4) Where high bioavailable/inorganic N is present, AM fungi colonization is reduced (average 15%)[2]

Considering that most hydroponic base nutrients provide over 45 ppm of P to solution this would severely limit AMF colonization/health.

Additionally, AMF colonization is shown to require some time to occur. For example, AMF colonies have been observed to require 70 to 80 days to reach 80% colonization in NFT production systems.[5] This time frame for population establishment would not be met by short cropping cycle production, but could be advantageous in crops that require a longer production cycle.[6] Based on this, I myself tend not to recommend the use of AMF in hydroponics where high inorganic P and N is present and where short term crops are being grown. I.e. better options exist; although as long as other beneficial fungi and/or bacteria which are not AMF (i.e. other genera) are also in an AMF product, the product may perform well under hydroponic conditions.

Thus, it is important to understand that all beneficial bacteria and fungi strains thrive under somewhat different conditions and what might be suitable for one environment may not be suitable in another when considering disease control.

Many years ago when I published Integral Hydroponics I was perhaps the first grow author who was singing the merits of using Bennies in hydroponics. At that time I predicted that Trichoderma would have a big future and I promoted the use of Bacillus subtilis in hydroponic settings. However, at that time I also put out a warning about the quality of some Bennie products that were being sold through hydroponic stores. This warning, over 15-years later, still stands.

Disclaimer: the lab tests following do not necessarily reflect what lab tests would show today. I.e. the manufacturers of these products could easily have improved their formulations since these tests were conducted. The point in adding these lab tests is to reinforce the message that the quality of beneficial bacteria and/or fungi additives sold through hydroponic stores can be highly variable.

Let me put up some lab tests that were conducted by the Oregon Department of Agriculture between 2013 – 2015 on just a few beneficial bacteria and fungi (both dry/powder and liquid) products that are sold through hydroponic stores. You’ll note that in many cases the bennies that are claimed to be present on labels were either “Not Detected” (i.e. nothing there) or were present at far lower levels than claimed as per the guaranteed analysis. In the case of Advanced Nutrients Piranha, Tarantula and Voodoo Juice (see asterisks) you might as well be purchasing bottled water because either none of the stated beneficial bacteria and fungi are present or they are present at almost non-existent levels.

So as not to single Advanced Nutrients out you’ll also note that the General Hydroponics Subculture-B product (a powder/granular) is every bit as substandard as the AN Piranha, Tarantula and Voodoo Juice products. Additionally, you will note that the Fox Farm product (a liquid) follows a similar trend while in the case of the Botanicare ZHO Root Inoculant (a powder/granular), the guaranteed analysis cfu (colony forming units) is shown to be lacking (albeit, this is the best of a bad bunch). 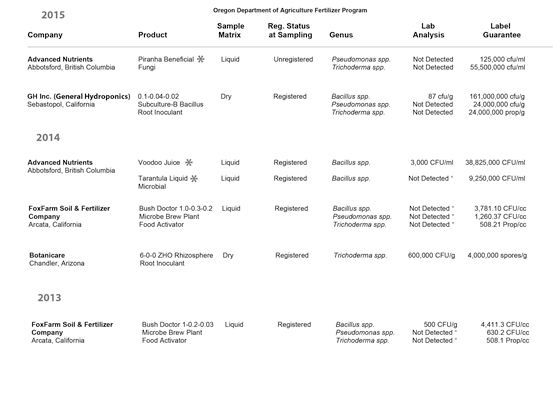 The point in adding these lab tests is to reinforce the message that the quality of beneficial bacteria and/or fungi additives can be highly variable and, in some cases, what the consumer is told they are paying for can be very different from what they actually receive.

The problem here is that for any Bennie product to effectively control root zone pathogens that product needs to supply high numbers of viable beneficial bacteria and/or fungi to solutions and substrates. And yet, in the case of at least a few of these products they actually provide nothing, or next to nothing, in terms of pathogen control. Thus, purchasers of these products are left wide open to root disease because while they have paid good money for a Bennie product and believe that product is offering root disease protection quite the opposite is true.

For this reason, a few tips when purchasing any Bennie additive:

High quality bioinoculants depend on having high concentrations of the microorganism(s), long shelf-life and a formulation appropriate to their use.

The problem with Bennie additives is the science behind manufacturing a high quality bioinoculant is extraordinarily complex. Among other things, a high degree of sterility is required in the manufacturing process (i.e. microbiological production standards are required) and the beneficial bacteria and fungi supplied by any product need to be added to a sterile carrier agent to ensure microbiological contaminants are also not in the product at high levels. However, what often happens in the production of liquid hydroponic industry products is that a manufacturer simply adds another company’s Bennies to water and then makes wondrous claims (e.g. proprietary Bennies made in-house by numerous PhDs) about their product. This may help them make sales to unsuspecting, gullible consumers but it does not help growers (you) prevent root disease.

Other than this, some suppliers may purchase dry products from specialized microbiological manufacturers and repackage them. However, the conditions under which repackaging takes place may not be ideal, the packaging itself may not be sterile, the starter material may have been substandard to begin with or it may have been stored for too long under less than ideal conditions before reaching the consumer, resulting in low viability or high levels of contamination or both.

It’s a tough dynamic and clearly over 15 years on from first giving warnings about the quality of some Bennie products that are available through hydroponic stores we still have a way to go. Although, things have got better and there are more and more good products appearing on the market.

I wanted to touch on liquid enzyme additives briefly because they are widely used in the hydro sector by growers. I’ve always found this surprising because to my knowledge there is not a single paper (no research that I know of) that demonstrates that enzymes, when added to hydroponic solutions, help to prevent root disease.

That’s not to say that liquid enzyme products offer no benefits; however, it just seems that if enzymes added to hydroponic solutions offered promise in root disease prevention then science would have investigated things more fully. For example, there are now numerous (hundreds of) papers that investigate beneficial bacteria and fungi in soils and hydroponics. From these numerous and growing studies we can easily deduce that beneficial bacteria and fungi, when used in hydroponics, effectively prevent root disease. Enzymes in hydroponics, on the other hand…. Nothing! Zip! One big black hole in evidential studies …

I think in some ways what has happened here is that one supplier originally made good sales with a liquid enzyme product and based on these sales other suppliers then decided to knockoff the concept and manufacture and supply an enzyme product. After all, if it isn’t broken don’t fix it right? A case of imitation based on profits, rather than innovation leading to measured scientific outcomes driving the market. However, at the end of the day are enzymes the best option for preventing root disease? To that I would have to say the answer is a categorical no, at least where the science is concerned.

This said, theoretically, enzymes work at a microbiological level where enzymes such as cellulase help to degrade and breakdown dead root matter. A byproduct of this process is simple sugars. I.e. plant roots consist of high degrees of cellulose. Cellulose is a substrate for ‘cellulase’ enzymes. Cellulose is the basic structural component of plant cell walls. It occurs in combination with other materials, such as lignin and hemicelluloses. It is a complex carbohydrate, or polysaccharide, consisting of 3,000 or more glucose units. Cellulose comprises about 33 percent of all vegetable matter and it is the most commonly occurring organic compound on Earth. The main structural element of a plant’s root cells walls are cellulosic components.

Cellulose is an extremely tough material that can take a very long time to break down. However, cellulase enzymes greatly speed up the process and convert (hydrolyze) cellulose into sugars and other compounds. At this point, the sugars become available to the rhizosphere microflora as a source of energy/food.

Therefore, enzymes help to create an energy source for beneficial bacteria and fungi and, theoretically, this can then help create an environment in which beneficial bacteria and fungi thrive. The only problem is that these same simple sugars can act as an energy source for microbiological organisms such as Pythium[7], the most common root zone pathogen that wreaks havoc in hydroponic systems, so if your biosphere/rhizosphere microflora is out of balance the use of enzymes in solution could theoretically favour the growth of pathogens over beneficial microbes.

You can perhaps see the dilemma. It just seems like a bad idea using enzymes without also adding beneficial microbes that would help ensure that enzymes favoured the growth of Bennies over pathogens. I.e. the only way to be sure sort after beneficial bacteria and fungi are in solution and the substrate is by adding these beneficial bacteria and fungi to the hydroponic growing system in the first place. Read more about enzymes in hydroponics here …..

Read more about the science of beneficial bacteria and fungi here ……

[5] Nelson, J.S. (2002) ORGANIC AND INORGANIC FERTILIZATION WITH AND WITHOUT MICROBIAL INOCULANTS IN PEAT-BASED SUBSTRATE AND HYDROPONIC CROP PRODUCTION, pp. 79