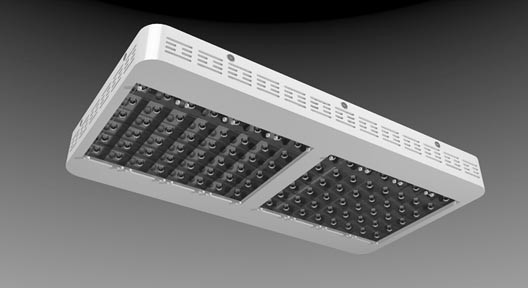 This article was first put online in early 2015. Since then, in 2020, LED has made huge leaps and bounds forward. An updated article, published in mid 2020,  on LED horticultural lighting can be found [HERE}

There’s been a lot of hype about LED lighting of late so I just want to touch on this one briefly in the interests of education and future proofing this book.

LEDs can have peak emission wavelengths from UV-C (~250 nm) to infrared (~1000 nm)[1] and it is the first light source to have the capability of true spectral control, allowing wavelengths to be matched to plant photoreceptors to provide more optimal production and to influence plant morphology and composition.[2]

The technological development of LEDs is expected to reduce capital and operating costs in the future. Major advantage of LEDs over all other lamp types for plant lighting is that the technology is evolving in electrical-use efficiency at a rapid pace. For example, blue LEDs that were only 11% efficient in 2006 were reported to be 49% efficient converting electrical energy to photon energy in 2011.[3] From an electrical efficiency standpoint, LEDs convert up to 45% (depending on color) of electrical energy to light. Comparatively, HPS lamps convert about 30% of energy to light.

However, as indoor growers, we are looking for optimum yields and not necessarily savings on electricity at the expense of produce. I mean, saving money on electricity is nice unless of course we are losing even more money through losing out on yield!

On this basis a few issues with LED lighting present…. at least for now !!.

LEDs from a Practical Perspective

With respect for the fact that LED lighting is a rapidly evolving technology, to date I have found that a combination of MH and HPS produces higher yields and quality than LED lighting. In fact, having run two side-by-side trials – one in 2013 and one in 2015 – comparing LEDs to combinations of MH and HPS I would have to say that at least where growing my preferred flowering/fruiting crop is concerned the results LED yielded (all factors taken into consideration) were subpar (i.e. I wasn’t impressed at all).

These (my) findings are inline to some research. For example, in one study that compared the growth and yields of tomato produced in a greenhouse where HPS and LED were used for supplemental lighting it was shown that in an overhead lamp configuration, LED lamps cannot compete with HPS lamps at current LED efficiency even though energy consumption was halved. See following table that compares the yield obtained under HPS v. LED lighting.[4]

In this study we can see that HPS produced almost double the yield of LED.

Similarly research comparing LED and HPS “interlighting” (lamps in the row either as LED or HPS) in addition to top lighting (HPS 600 watt) on sweet pepper growth showed higher yields with HPS treatment. This was attributed to lower number of fruits with LEDs compared to HPS. The yield with HPS interlights was significantly higher than with LED interlights. The yield difference was 20 % less yield with LED interlights, which could be observed during the whole harvest. Cumulative dry matter yield and N uptake was significantly reduced with LEDs. Additionally, HPS seemingly produced higher quality sweet peppers with less flavor found in LED grown fruit at one from three tasting experiments. This study concluding:

“At this stage, it is not recommended to change (from HPS) to LEDs.”[5]

By the way, as you may have gathered, this is precisely the recommendation I would make other than to say, “at this stage it is not recommended to change from a combination of MH and HPS lighting.”

In fact, there are all sorts of dubious claims being made about the efficiency of LEDs with limited research data, if any, to support them. For example, some LED suppliers assert that LED grow lights produce higher growth rates because their colour spectrum better promotes photosynthesis more so than high intensity discharge (HID) lighting (i.e. HPS and MH). This is, in fact, misleading. Studies show that photons within the photosynthetic spectrum of 400 to 700 nm are essentially equally capable of driving photosynthesis and, therefore, plant growth rates. Light (PAR) intensity has been shown to have a larger effect on plant growth than light colour spectrum.[6] For example, one of the advantages that is highlighted by the manufacturers of LEDs is the possibility to optimize lighting spectra selecting only specific, physiologically reasoned light wavelengths and not to waste the energy for unprofitable spectral parts such as green or yellow. However, the so called “unprofitable” light spectral “parts” are shown to have significant physiological effects on plants.[7], [8] Removing them from the lighting equation would, therefore, have detrimental effects on growth rates and/or plant morphology.

Further, ultraviolet (UV) radiation is typically absent in LED fixtures because UV LEDs significantly reduce fixture efficiency. Sunlight has 9% UV while standard electric lights have 0.3 to 8% UV radiation. A lack of UV causes disorders in some plant species. [9] Additionally, some plant species are shown to produce flavonoids and phenolics to protect themselves against UV radiation. This only occurs where UVa and/or UVb is present[10], [11] Therefore, a lack of UV radiation may have some implications in medicinal crops where a rich diversity of flavonoids and phenolic compounds is sort.

Another claim commonly asserted by suppliers of LEDs is that they reduce operating costs. However, a study by Bugbee and Nelson (2014) calculated the initial capital cost of fixtures per photon delivered and determined that LED fixtures cost five to ten times more than HPS fixtures. The five-year electric plus fixture cost per mole of photons is thus 2.3 times higher for LED fixtures, due to high capital costs.[12]

However, Bugbee and Nelson also pointed out:

“Manufacturers are working to improve all types of lighting technologies and the cost per photon will likely continue to decrease as new technologies, reduced prices, and improved reliability become available.”

This is important to note because in the coming years as lighting technology evolves further and costs are reduced, things may change.

For now though, I recommend that if your goal is to realize optimum yields and quality in prolific flowering/fruiting crops, a combination of MH and HPS lighting is still the way to go. This recommendation might change in the coming years based on evolving light technologies. Therefore, keep an eye on things.