Why Shorter Plants are the Ideal in Indoor Growing Situations

The term “plant canopy” refers to the spatial arrangement of the above-ground organs of plants in a community. Leaves and other photosynthetic organs on the plant act as light energy collectors and exchangers for gases such as oxygen and CO2. Stems and branches support these exchange surfaces in such a way that radiative and convective exchange can occur in an efficient manner.[1]

The structure of the plant canopy affects the difference in light the top of the plant receives compared to what the lower regions receive. That is, the leaves and stems in the upper canopy act to shade the leaves and stems below them. As such, there are light gradients from the top to the bottom of the plant. For example, on a sunny day, inside the canopy some leaves are fully sunlit, others are exposed to frequent sunflecks and the remainder exist in deep, but occasionally punctuated, shade.

These gradients in light have implications to the levels of photosynthesis that occur in different regions of the plant. For example, in the case of C 3 plants, less rubisco is allocated to shaded leaves than to sunlit ones.[2] This effect causes their photosynthetic rates to saturate at lower light levels.[3] It also causes their photosynthetic capacity to be lower than that of leaves at the top of the canopy. This is just one reason why the fruit/flowers high up on the plant (those fruit/flowers that receive more light) are larger and denser than the fruit/flowers found in the lower regions of the plant.

Canopies normally are not solid sheets where light is blocked by the outer canopy from reaching areas of the inner canopy. Instead they are a loosely stacked formation of leaves which help plants to effectively absorb most of the incident light with the leaves near the top of the canopy absorbing near maximum light and the lower leaves receiving light of a reduced intensity and also an altered spectral composition.

Recent studies have shown that plants which are grown under artificial light sources receive far less light in the lower regions of the canopy than plants that are grown in natural light.[4] This comes down to the inverse square law.

In studies with artificial lighting, light gradients in vegetation are not only dependent on canopy characteristics, but are also strongly driven by the distance between light source(s) and vegetation.[5]

Compared with natural sunlight, plant lighting conditions are dramatically different when grown under artificial light. In the case of artificial light, light intensity strongly decreases with increasing distance between the lamp and plant leaves.

This is because of the inverse square law which states the intensity (of light) is inversely proportional to the distance from the source.

What this means in practical terms for indoor growers is:

1) Light sources emit energy in a 360 degree, circular pattern. In other words, light spreads out evenly and in all directions from its source. As the light spreads from the source its intensity diminishes exponentially. Technically, the inverse square law tells us that light that travels twice as far from the source is spread over four times the area and hence has one fourth the light intensity. For example, if the light intensity from a lamp was measured 0.5 metres away from the lamp and it was 1000 lumens M2, then 0.5 metres away from this point it would be 250 lumens M2. 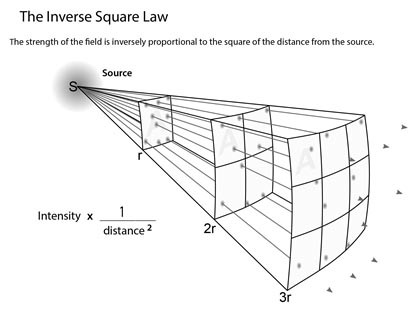 In understanding the inverse square law we can see that if we were growing a six foot plant indoors it would take a very powerful lamp to provide enough light to all regions of the plant for optimal photosynthesis to occur.

For this reason, where growing with overhead artificial HID lighting, indoor growers produce shorter plants than would be produced outdoors under natural sunlight. This helps to ensure the plant is receiving adequate levels of light throughout the plant’s canopy to promote high photosynthetic rates and optimal growth.

While some growers do produce larger plants under HID lighting these plants are typically grown by tying/training the plants down and spreading a single large plant under multiple lights (e.g. one six foot plant may be tied down to three to three and a half foot in height and spread under two 600 watt lamps) and/or ‘interlighting’ might be employed.

Interlighting refers to where lights are not only placed over the top of plants but also at the sides of the plants or dropped down in between plants that are being grown in the crop. This provides areas of the plant that would otherwise be receiving very little or no light with light for photosynthesis.

However interlighting presents with a couple of issues in that; 1) lamps emit heat which means additional heat produced from additional lamps (lamps used for intercooling) equates to, particularly in warmer climates, additional cooling is required to offset lamp heat and; 2) the intercooling lamps, when placed down beside, between or inside of plants, can/will burn and damage leaves unless some form of lamp cooling device/s (e.g. cool tubes or water jackets) are used.

I’ve dumbed down the subject of lighting and plant height somewhat because I’ll be covering more on light in other areas of the book. However, based on the information covered here we can understand why we ideally want to produce shorter plants in indoor growing situations.

There is also one other benefit associated to growing shorter plants in indoor, under light growing situations.

An important factor to discuss in relation to yields is crop cycle times, or the time it takes from day one (planting) to finish (harvest). This one really comes down to a few simple rules.

Okay, that may sound somewhat confusing to the newbie albeit more advanced growers undoubtedly get what I am saying. Basically SOG (Sea of Green), where multiples of small plants (e.g. 16- 24 plants) and grown in a M2 area versus say one large plant grown in that same M2 area, ultimately produce more yield when averaged over multiple crop cycles due to the time it takes for the SOG plants to finish flowering and become ready for harvest.

For example, one large plant in a M2 area may be grown in veg for 2 ½ – 3 weeks and the crop cycle time from start to finish may take 15 – 16 weeks. This plant may yield a pound and half to two pounds. Conversely, let’s say 16-24 SOG grown plants, are placed into the system and grown in veg for two days at which point flowering is induced by switching to the 12/12 light cycle. These plants (dependent on genetics) may be ready to harvest in as little as 9 weeks.

The SOG plants all finish at about 1 – 1 ½ foot tall but there are 16 to 24 plants in an M2 area which produce about an ounce and a half per plant. The end result is the same 1 ½ to 2 pounds per M2 area but instead of the crop cycle taking 15-16 weeks (1 large plant) it has taken 9 weeks to produce the same yield as the one larger plant. This represents massive savings in time. What this means is that you may harvest 6 crops per year SOG growing while, where growing larger plants for longer, you may only harvest 3-4 crops in that same year. When this is equated in terms of yield per m2, per PAR watt, per year this equates to SOG producing a far higher yield per m2, per PAR Watt than growing larger plants in the same area with the same levels of lighting over the same period of time.

However, growing SOG means having large numbers of plants. Conversely, larger plants will produce about the same yield in the same m2, albeit taking longer to harvest. This means that fewer plants are required per crop cycle.

Rapid veg times ultimately determine the finishing heights and the biomass of the plant at harvest point. Through understanding this, you can experiment with various genetics to refine your grows to any number of plants within an M2 area.

For example, I tend to grow four plants per m2 which finish at about 2 ½ feet tall. To achieve this I grow the plants in veg to about 8 – 9 inches and then switch them into the 12/12 light cycle. Using the types of genetics I like to work with, the entire crop cycle takes about 12 weeks. I find this provides a nice balance between plant numbers and yield. Other growers might, however, only grow one large plant (e.g. a 5-6 foot plant) per m2 and yet others may grow huge tomato plants that take up 1.5 m2 or more under two lights and take many weeks to finish.

This one obviously comes down to grower choice. More small plants equals higher harvest per m2, per year, while few larger plants that take longer to harvest equals lower yields per m2, per year.

Thus, rapid vegetative times become a very important point to consider in indoor growing for two reasons. One; shorter plants are more suited for under light growing due to the inverse square law and plant canopy light gradients and two, higher numbers of shorter plants will provide more yield over multiple crop cycles than fewer larger plants produced under the same PAR watt in the same M2 area.